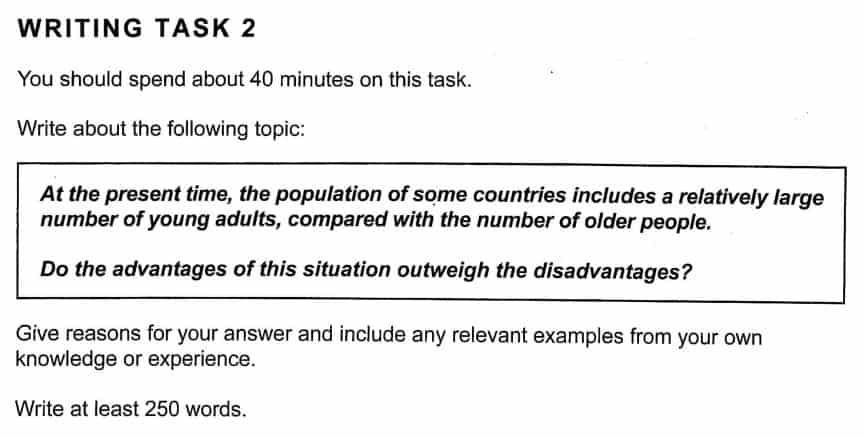 Ideally, all members in a society try to bear a fair share of the burdens, but their contribution may differ as they age. While a country benefits when its younger members outnumber the older ones, this imbalance cannot be without drawbacks. (41 words)

Many consider population as an enormous potential for every country. While a considerable increase in the number of young people provides benefits for any country, it undoubtedly presents challenges as well. (32 words)

It is a fact that in several countries the young population outnumber the older citizens. I have reasons to believe that this situation creates both benefits and problems. (28 words)

Sometimes the number of young people surpass other age groups in the society. This situation creates both advantages and disadvantages (20 words).

Elderly population /// An aging population /// substantial changes in the size of youth populations /// Youth can be a positive force for development /// to harness the opportunities for economic growth /// puts strain on education and health services/accommodation/ food supplies /// investments in human capital /// the country may struggle to educate young people /// gives the country a chance to build an educated and civilized community /// to meet the brainpower demand of the country /// education system leaves behind substantial proportion of young population /// Inadequate investment in … limits their ability to reach their full productive potential /// their productivity, entrepreneurship and innovation will drive future economic growth /// Some countries are experiencing historic highs in the proportion of the population in the working ages /// a host of factors help to determine the pace of economic growth /// Demographers and economists have heralded the window of opportunity presented by this rise  /// A growing population adapts better to new conditions /// a stationary or declining population

Population makeup of each country offers hidden and obvious perils and opportunities. While there are advantages for a country when the number of its young people outnumber the older ones, there are also a downside to think of. In this essay I will examine the issue and discuss positive and negative consequences. (52 words)

A surge in the number of young citizens in a given society will undoubtedly create some opportunities. First of all, there will be more workforce for the industry and other sections of the country and this is a good news sine since these employees will be able to produce desired goods and services and consequently the economy will be more prosperous. Secondly, young people will not demand much medical care because they live the period in which their body can fight many disease-causing organisms or the illnesses of a chronic nature simply have not been yet surfaced. They need far less medical attention and related expenses and this gives the chance to the government to invest for more productive purposes. (120 words)

However this change can not be all good and there is a downside to think of. First of all, the experimental experience of young people who are about to get employed in different sections are inferior to that of those who live their forties and fifties. This means the overall delivery of the same result at different fields in simply unrealistic. Secondly, a glance a the economy of many developing and even developed parts of the world reveals that such changes poses the threat of unemployment. Economies simply fail to manage the ever growing percentage of young population and ultimately a sizable chunk will be rendered unemployed. (107 words)

In conclusion, I believe the fact that the population in some countries are made of more young citizens these days offers both benefits and disadvantages for those countries and needs to be exploited or dealt with by those societies. (39 words)

The age of the population has a profound effect on every aspect of life in each county. Although there are disadvantages when the percentage of younger citizens increases, the benefits of such situation seems to be more. This essay will discuss this point. (43 words)

While in some parts of the world old population is an issue, in other parts young population outnumber the old people. I believe there are both advantages and disadvantages to think about. (32 words)

There are benefits when the population of young people increases. First of all, the country can enjoy the presence of many people who are ready to learn and work for a number of years. This means the country can promote its economic situation and produce goods and services. Since young population do not ask for a very high salary and usually are ready to ask older people’s advice, they can learn quickly and apply whatever they experience. Secondly, young adult have more reasons to be happy and optimistic. They are healthy and engage in more social activities. As a result they look attractive to those around them and create a pleasant atmosphere at work. They are also admired for their success. (121 words)

There are, however, drawbacks when the younger people outnumber the old. First of all, more investment is required because more schools, factories and companies are needed to meet new demands of the society. The country needs to educate millions of people every year and employ them when they graduate. This needs a considerable fund from the government and effective planning. Secondly, unemployment may increase because in many developing countries the growth of young population is not carefully planned and governments are not able to use the added workforce. The lack of investment and poor managements in many countries means young people fail to find a decent job and remain jobless for many years. (113 words)

In conclusion, I believe a rise in young population will have both negative and positive effects in that society. (19 words)

با عرض سلام خدمت استاد گرامی
آیا جملات زیر برای مقدمه درست هستند؟
It is fact in many countries, the young population considerabaly increas. This issue creat a situation that have many advantages and disadvantages.

It is fact in many countries منبع شما برای این ساختار؟؟؟

Nowadays, some countries witness a considerable number of young adults in comparison with older population. Undoubtedly, this situation creates both advantage and disadvantages for the country at the same time. So, I am going to discuss both sides in this essay. On one hand, a substantial number of young citizens in a society can provide the given society with lots of opportunities. First of all, having more young people means having more workforce for industry and services which can lead to producing more goods and services, and all these in case of wise management can help the country to have… بیشتر بخوانید

The population of a country has an implicit balance in various aspects, including its average age. Any tendency in these aspects has its consequences. Here, we reviewed some cons and pros of the trend in the average age of a population. 39w) Many people believe that young countries are more prosperous. First of all, young workers are more productive human resources due to their health, energy, and creativity. Youth can play a national treasure role. The better the human resource, the more economic growth the country can achieve. Secondly, military forces require young people to employ. Army actions demand physical… بیشتر بخوانید

Nowadays, in some countries the range number of young population has increased compared with its old ones. There are some reasons that support the benefits of this issue while some others remind its drawbacks. young population structure brings remarkable advantages to the countries. For one, they can use the benefits of numerous young labor force obviously. Besides that, new young generation often have higher education and this means a generation with specific skills comparing with elderly people. So, high growth of young population leads to an appropriate workplace rivalry and the industries and other sections of the society can be… بیشتر بخوانید

Large number of young people + #prevent emigration #use talents – #educate them #inexperience them Nowadays some countries face young population. This type of population can be having many positive and negative points.(18 Word) Young population in any country can provide advantages.First of all, an young country is independent of abroad workforce for this reason it can be a prefect opportunity because abroad people can be creating predicaments in that country. For instance,for emigres, host government should provide primary amenities that lead to government lose an huge financial capital but young society can be spending such money on creating modern… بیشتر بخوانید