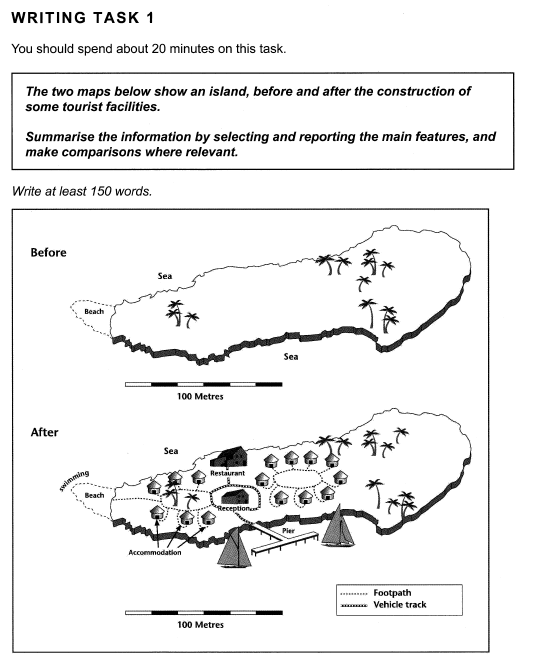 Two maps depict a tropical island of a few hundreds square meters before and after the construction of some leisure facilities for tourists.

It appears that two sites for tourists accommodation have been built, which are connected to each other and to other areas with footpath. There is also a reception in the middle of the island, which is accessible by a vehicle track from the southern part, where a pier is constructed for some pleasure boats. The other significant change is a single restaurant in the northern part of the island that can be also accessed by vehicles. The beach in the western side can be used for swimming after this development. There are also some palm trees in the western and eastern regions of the island, which seem to be untouched by this change.

Overall, the development which appears to be more concentrated on the western side and the center, has dramatically changed the face of the island in a way that it can accommodate a few hundreds of tourists at the same time. (177 Words)

In the first map there is not much for possible tourists to enjoy except a swimming area in the left side of the island. How ever in the second map there is a restaurant in the middle of the island on the left close to a reception. There is a vehicle track for tourists who want to reach the reception or the restaurant. Other important change is the construction of several accommodation sites for tourists not far from the reception. Other important facilities for enjoyment of tourists are the boats for sailing in the southern side of the island,where a pier can be seen and a beach for swimming in the left side.

Overall, it seems the island is totally different after the construction of tourist facilities and especially the western and middle parts can be a good place for tourists to enjoy their stay. (167 Words)

These two maps compare the different features of a certain island before and after building various touristic facilities.

Firstly, it can be clearly seen that the vast majority of the island area was almost unused. Since it has only a small beach on its western part and some trees planted on both sides of the island. However, the central zone of the island was merely free.

On the other hand. Numerous facilities were built later. First of all, a reception was constructed in the heart of the central region. This reception was connected to a restaurant in the northern area and the pier in the Southern part by a car truck. In addition, this pier was used for boat trips. Furthermore, many accommodation units were constructed on both sides of the reception with a footpath connecting the units with each other as well as with the reception. Lastly, it`s interesting to mention that the green areas and the beach were unchanged. Nevertheless, the eastern area of the island was not properly used as before.

All in all, it is noticeable that the island changed to a complete and beautiful touristic place that had many available facilities. 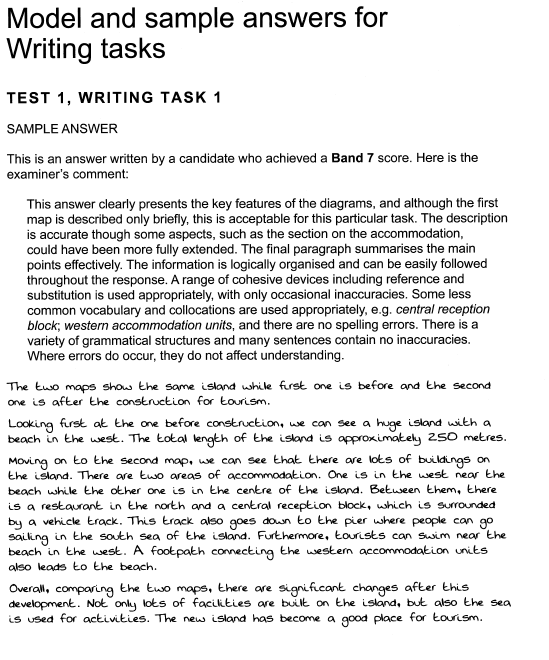 Two maps compare an island noticeable differences before and after some touristic facilities constructed. According to the first map which is related to the island before facilities construction, it is expanded about 200 meters length and roughly 100 meters width with some scattered trees in both east and west sides. There are no imperative facilities to attract tourists just a beach on the western part of the island. The second map shows a remarkable improvement in the island. (second map shows the island in its remarkable improvement). A reception center is defined as the central part of the island. Some… ادامه مطلب »

Two maps show an island that one of them owned by before construction and another show after construction of tourist facilities.(22 word) In the first map there is just some trees and a small beach in the island but after construction in second map it can be seen that such island returned to an attraction tourist with adding a lot of accommodation in the west and East of the islan that they are the majore alteration there and aound of them is consntructed alot of foodpath for walking . In the centeral of the island is constructed a reception that… ادامه مطلب »